NEW RUSSIA, N.Y.
The backroads from Plattsburg to West Winfield follow a wide rocky creek called the Bouquet River that appears and vanishes and curls under low bridges and behind tall pines.

My friend Laurie and I had a very loose roadtrip schedule — 24 hours to do a five-hour drive — so we were open to spending some time closer to the water on one of the first hot days of spring.

“Let’s go there!” one of us said with the enthusiasm of a mom set free and desperate for adventure when we passed a sign for Thrall Dam. Except was the last and only Thrall Dam sign we would see. We watched for it, but maybe the whole dam thing was a hallucination. All we wanted was to get closer to the water, and we wanted it five minutes ago, and there was that river coiling just out of our reach like a housecat. We swerved into the first pullout we found and climbed down grass, dirt, and tree roots to get to the Bouquet.

Upstream were pockets of calm and a picturesque bridge. Downstream, a glassy pool into which a young fisherman wearing khakis and flat sneakers was casting his line, a beagle-shaped dog at his side.

Yet there we were between the two, where the rocks were at their thickest and most uneven and the ice-clear water had to bubble and force its way to tumble loudly down a two-storey-high waterfall.

Laurie had taken her sandals off at the top of the embarkment; I let my rubber soles slide over the moss till I found sure footing.

“There’s a walking stick in there,” Laurie said, pointing.

“Huh,” I replied. I had nearly fallen while standing still on a rock. I was mortified. Plus, I wasn’t sure where she was going with this whole walking stick business.

“Or it could be just a stick stick. Look at it.”

I squinted into the blurred brook. There was a good-size stick in there, indeed, that looked smooth and straight, with a slightly pointed tip and what could have been a thicker handhold.

“I’m going to get it,” she announced.

It was smack in the middle of the river, at the head of the waterfall, and so I said (as is my custom), “Don’t kill yourself.”

If she rolled her eyes at me, I didn’t see it, so busy was I staying soberly upright as I attempted to take pictures of the rushing river with my phone. She stepped into the glacial water and set one dainty foot on a large, slippery rock. I was paying attention now — I didn’t know how I’d get my friend from the bottom of the waterfall if she tumbled in.

“Be careful,” I said again, in my best mom voice.

She threw me a look made of humour, annoyance, and self-preservation and stepped back onto the rocky bank. 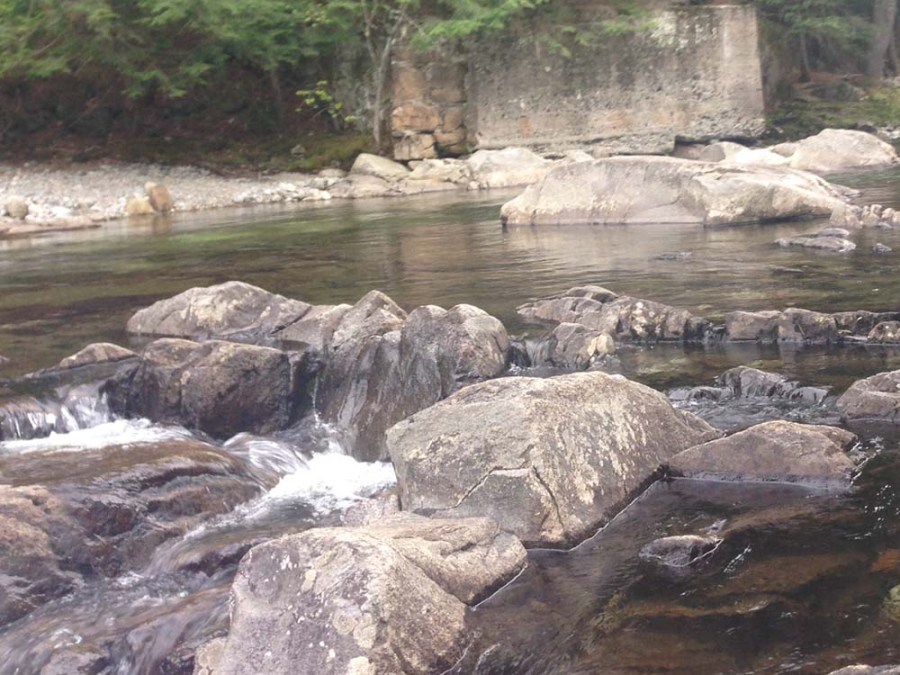 The story should have ended there, but I felt bad. She clearly wanted that stick badly enough to risk a bloody head injury and hypothermia. Plus, you know, I really love it when rocks and water come together to make something beautiful. I kicked off my sandals — nearly falling on my own head again, and stepped ankle-deep into the water.

It was the kind of icy that forces a lump into your throat and sends chills up your sciatic nerve, along your spine, coming to rest somewhere at the base of your neck like a hunk of snow that gets in under your scarf and coat that you know is going to melt and run down your back and make you freeze from the inside out.

I scanned each rock just below the clear surface, planning a path to the stick that avoided stepping into a wild whirlpool between me and it. It wasn’t going to be possible. Doubled over, with each foot on slick stone and fingers castled over rocks that turned their faces to the sun, I did an awkward slippery dance in a half-circle toward our prize. It was almost in reach. One foot was in the vortex, pulling me with more strength that I’d imagined toward the waterfall and the fisherman, who had thrown in the towel and was climbing the embankment with his dog. He either ignored our girlish squeals or couldn’t hear them over the roar of the falls.

I was wibbly-wobbly, but the stick was just there. Laurie was yelling encouragement in the form of hilarious taunts.

I developed this very non-graceful method of sliding my foot down a sharp rock till it found the place where it met another rock, then lifting my other foot to a stone on the opposite side, sliding till I found a similar foothold, all the time bending nearly double to steady myself with other rocks. I spent a good minute in the vortex, trying to plot my next move.

Two stones later, I leaned — closer closer closer — no longer concerned with my numb ankles, or the jagged stone on the soles of my feet.

Closer, till my fingertips like a lover brushed the sweaty tip and it was that gentle touch that renewed my resolve and with one more push forward and down my palm grasped it at the slippery base. Rather than recoiling at its wet and waxy flesh, I held it aloft and yelled something savage and triumphant as Laurie captured the moment digitally.

Aglow, I looked down to check my footing, only to discover one side of my tank top had been yanked down during my passionate dive.

“AH! My boob!” I yelled. “One more without the exposure!”

I posed, and though it didn’t document the exact moment of triumph, the photograph drips with the residue of my joy. 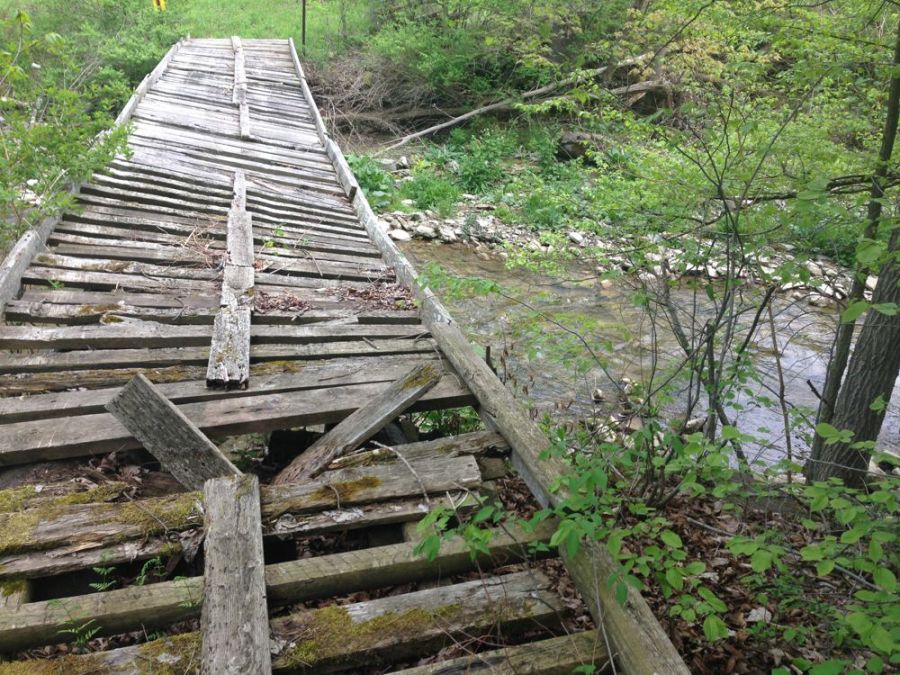 That dam stick set the tone for the rest of our journey, which saw Laurie conquer a giant tree stump, the threat of skinny dipping upriver, the crossing of a rickety, rotten bridge for no reason other than to cross it … but never a stop at the mysterious, missing Thrall Dam.