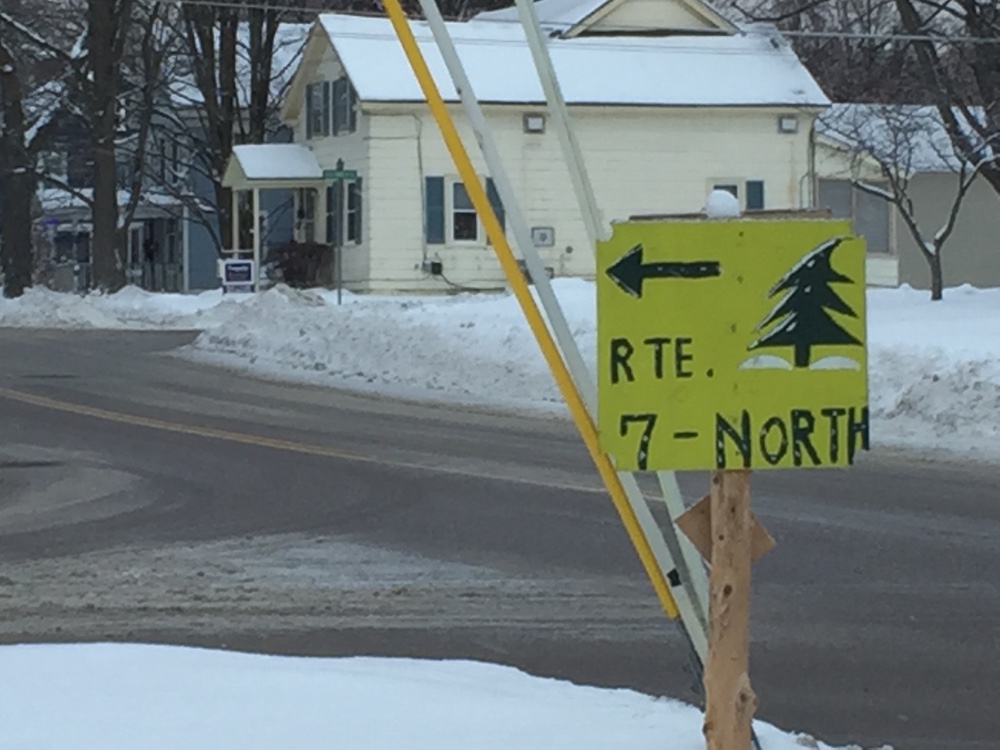 We left between snowstorms and half an hour late.

It was Christmas Day, and Trevor’s flight to Florida was at 2 p.m., leaving from Burlington, Vermont. There was more than 12 centimetres of fresh snow to be shoveled and plowed through, meaning we started our drive in the late morning with soaked-through socks inside our boots.

10:30 a.m.: Our feet were cold, but my heart was awfully warm when Trev put down his phone and said without a hint of irony or sarcasm, “I’m just going to put this away and enjoy the drive with you.” I didn’t tear up or anything, because I’m a cool mom, as you know, and we chatted a bit as we sat behind plows and salt trucks going half the speed we were legally entitled to drive.

One of my wipers — the one on the driver’s side, natch — was working perfectly except for the bit right at eye level, where a spot about the size of one of Trev’s hands was smeared and filthy and becoming more opaque with each passing truck. I stopped at a gas station to clean the windshield, but didn’t waste time getting gas because I should have had enough to get me to the border. 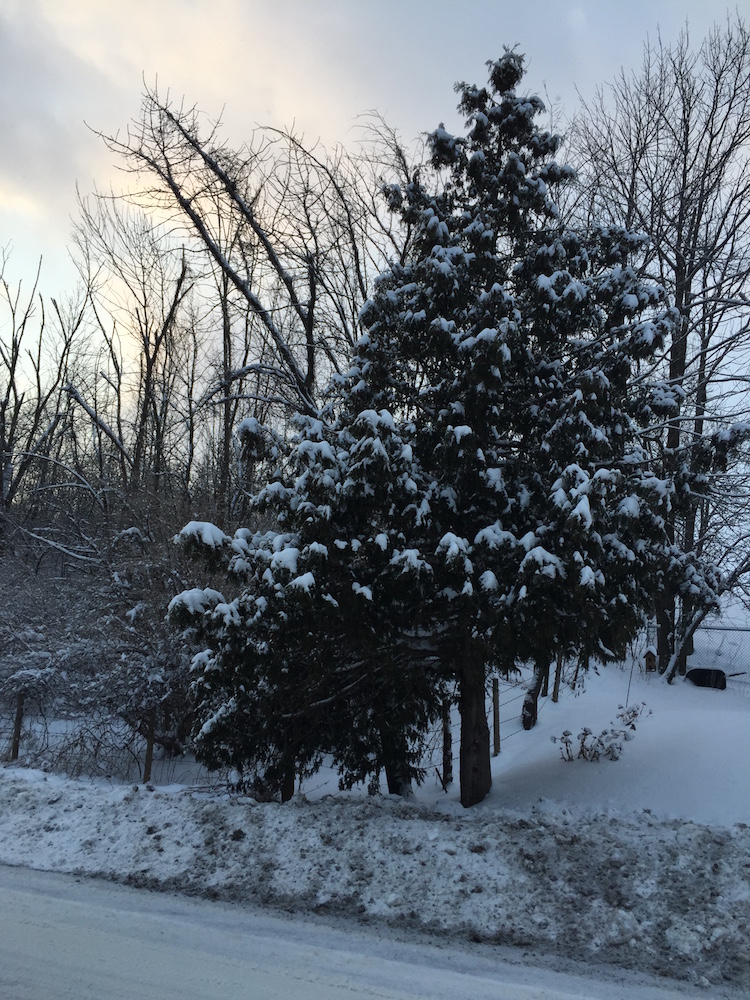 11 a.m. We were back on the highway, and the GPS promised we’d make it to the airport by 12:45. We were golden — at least until I had to use my wipers again.

I leaned my elbow on the centre console, with my head near Trev’s shoulder, so I could see out the perfectly clear section in the middle of the windshield.

“Did you try to fix the wiper?” he asked.

We weren’t going too fast, not then. Snow was blowing hard around us, cutting visibility each time we emerged from farmers’ wind breaks.

“It’s gorgeous, though,” I said. “It’s so grey and white you forget you can even still see in colour.”

“Till you get off the plane in Florida and you’re surrounded by flowers.”

“Can you turn on the heater-thing that dries my feet?” he said instead.

My gas light went on. 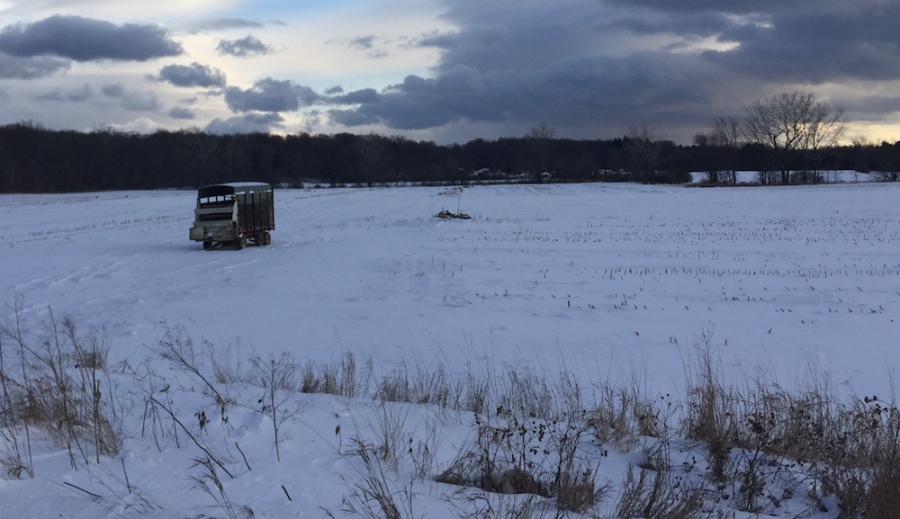 11:30 a.m. While Trev paid for the gas, I cleaned the windshield again and inspected the wiper. There was a little spring-do-dad that wasn’t engaged — when I tapped it with my middle finger, it popped into place and the wiper began behaving responsibly.

Triumphant, we got back on the mostly empty road. We were half an hour from the border. Easy-peasy.

Okay, maybe a little more than that, what with the poor road conditions, heavy wind and even with my conservative version of speeding.

A piece of ice that had been trapped under the hood’s bib was shaking, looking like it might come loose. It was about the size of my forearm. “That puppy’s going to scare the bejesus out of me,” I said. “If I pee on the seat, we’re gonna have to stop again.”

We watched it warily for a few miles, but it didn’t come free till we were distracted by other things, and we both gasped when it slapped against the window.

“My seat’s okay!” I said triumphantly.

A piece of ice on the other side started to wiggle. My gas light came on.

I’d only put in $10, holding out for that sweet, cheap U.S. fuel. Christmas Day, it’s not like anyone else would be trying to cross the border. Who the hell travels on Christmas Day? 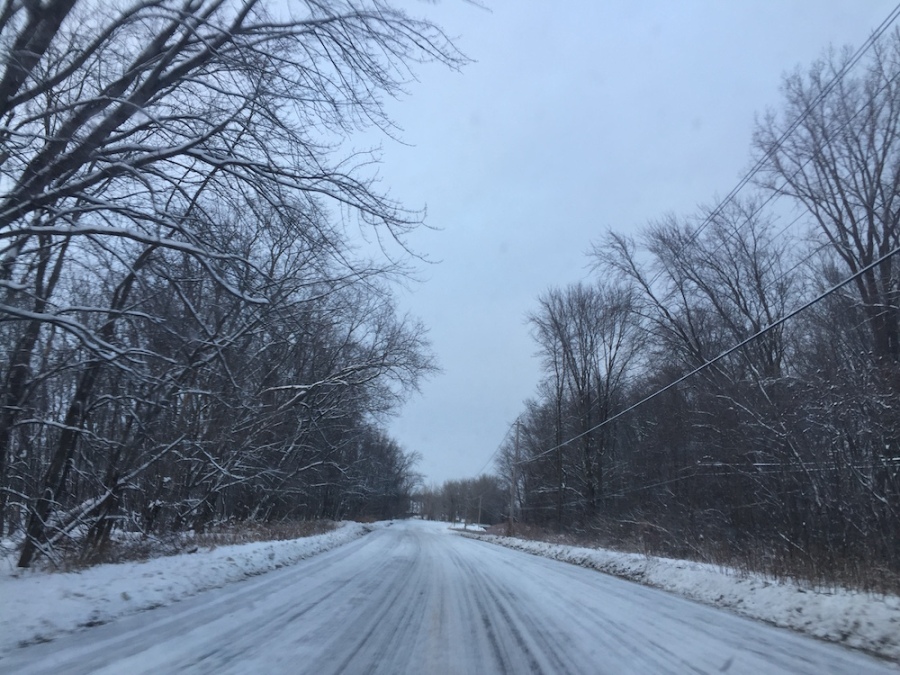 12:17 p.m. My heart sank as we reached the border and slid into line behind at least a dozen cars.

“You’re checked in for your flight?” I said.

“You have your ticket? You have your passport?” I had his passport, of course, clenched with mine in a suddenly sweaty hand.

The guard was allowing about two minutes per car. Not so bad. We’d be okay. I started breathing again.

And then he kept one car for six minutes. And another car longer than that. I texted Melani furiously: “He’s going to miss his flight.”

She called Delta while my heart pounded.

“She thinks that he might still make it because he’s not checking luggage,” she relayed by text. “His best chance is just to get there as fast as he can. It’s the last flight out and if he misses it the change fee is $200.”

“Where are you headed?” the guard asked.

“Burlington. My son has a flight to Florida.”

“What time’s the flight?”

He looked slowly at his watch, raised his eyebrow. I kept my voice level: “Yeah, I know.” He shook his head and handed back the passports. It was 12:46.

The thin finger on the gas gauge had dropped below empty. We were 40 miles from the airport. In a past adventure, I had driven at least 50 kilometres on empty. There’s math in there. Take it slow and the gas lasts longer — everyone knows that. But we had a plane to catch.

Trevor leaned over to look at the speedometer. “Mom. Mom what!”

“We’re in a Christmas movie,” I said. “It’s the last scene and we’re racing to the airport. They always turn out okay. Right?” 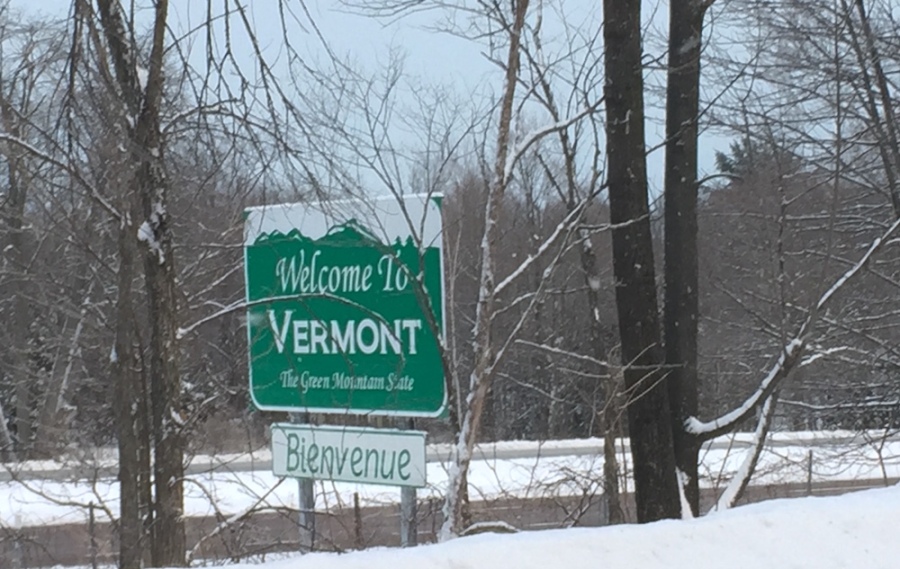 1:24 p.m.: I’d never seen the gauge drop that low. We were less than 10 miles from the airport, but if I ran out of fuel now, there was no guarantee we’d be able to flag someone down to save the day. I spun into a gas station.

“What can I do?” Trev asked, leaping into action.

“Get your bag. Hold it on your lap, because if we make it … it’s gonna be close.”

Putting another $10 in the tank has never taken so long. I peeled and fishtailed out of there like there was no tomorrow, or at least no 20-minutes-from-now.

“When you get there,” I said, “I’m gonna slow down just enough for you to get out. Run to security and if there’s a lineup, just be really, really polite, but ask to cut in. Explain what’s happening. If you’re really nice …” I couldn’t have been more Canadian if I tried. “Text Melani if they let you on the plane. I’ll just keep circling till … whatever.” 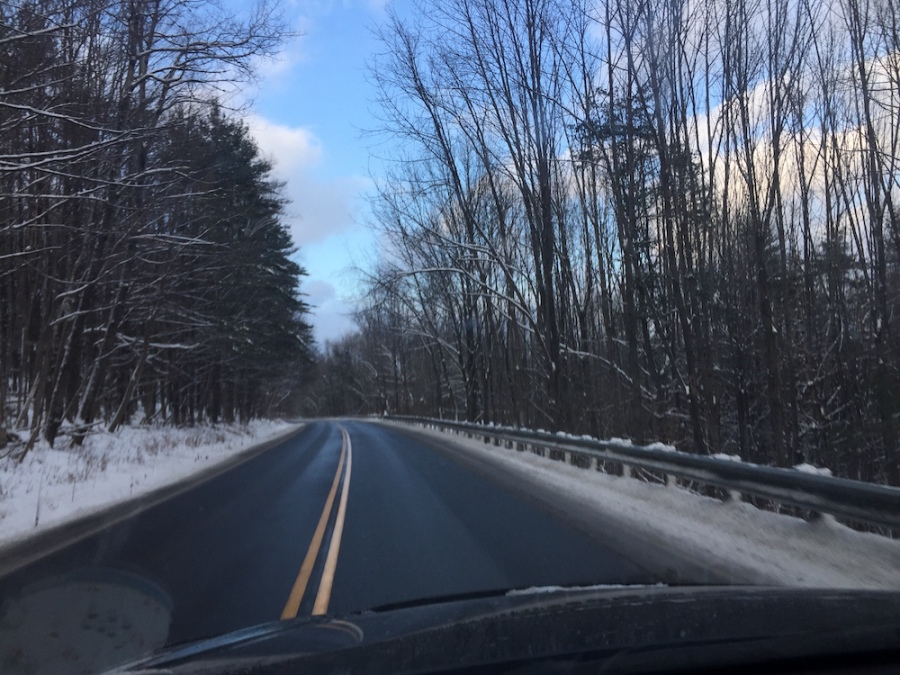 I couldn’t park anywhere nearby to watch the drama. Heart pounding, I inched the car forward and tried to peer through the doors while not looking at all suspicious.

I texted Melani: “I can’t leave the car. He went in more than 5 minutes ago. Please text me if you hear from him. I’m turning data off but can receive texts.” 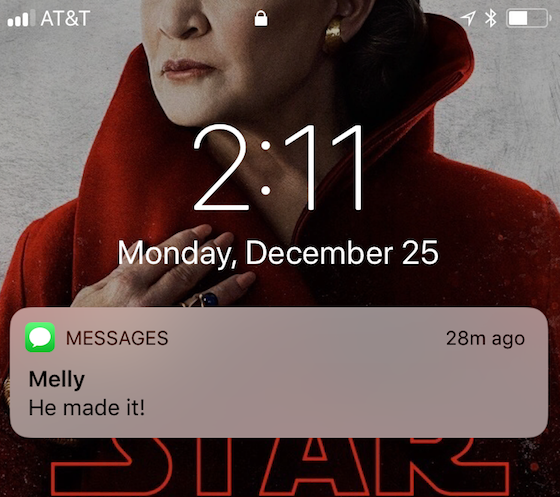 1:45 p.m.: That’s when my Christmas present to me kicked in: With him safely delivered, I filled my tank with that sweet, cheap U.S. fuel, pointed the car vaguely north on Vermont’s back roads and wound and wiggled my way home, slowly, blessedly alone and with every molecule of stress stripped from my shoulders and neck. 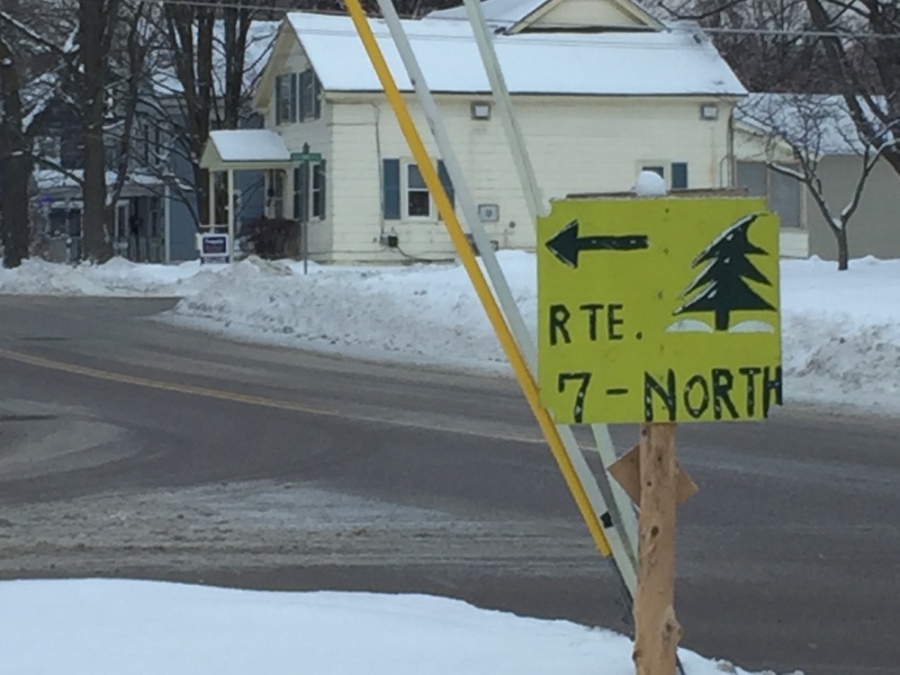