The retelling of a legend from the historic Forges in La Mauricie is part of an occasional series exploring North America’s national, provincial and state parks.

The call was as common along the riverbank as that of the loon or the coyote.

Ida heard but she didn’t turn toward the call. Little waves lapped at her fingers, washing away a layer of sand to reveal hands as pale as white pine. She was speaking, but her words were caught on the current and swept away by the river.

“Sweet blessings, River Spirit,” she said eventually, lightly. She wiped her hands on her chemise because she’d forgotten her apron.

She didn’t run home, because Ida didn’t run. She didn’t want to miss anything along the way. Rather, she stopped to pick a bell-shaped maidenstear, turning it inside out and spreading its delicate petals to make a tiny dancer. She picked up a smooth flat stone that would be perfect for skipping or for pitching at a creature that got too close to the garden. She dropped it into one of her shoes, which she was swinging at her side. 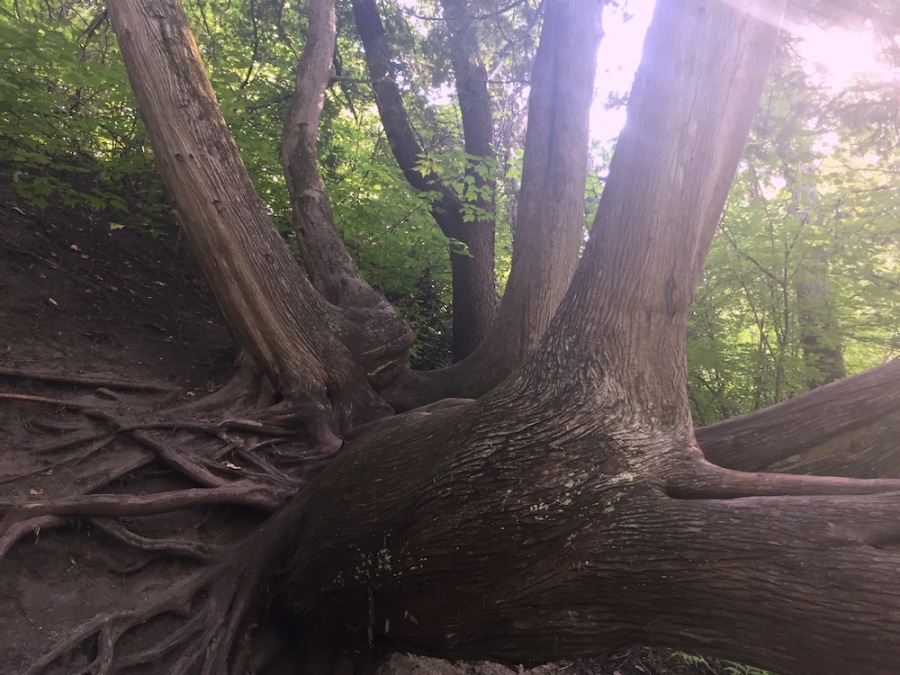 She noted a new trail that had been stomped perpendicular to hers and she squinted into the woods along it.

She said a word of promise to the trees and picked up her pace ever so slightly.

Her mother’s admonishments began before her fingers were even on the door handle.

“And I’ve been calling you so long my throat is raw. What are we to do about that?”

Her mother’s hand was already holding a wooden spoon and Ida sidled out of reach just in time. “Where have you been? Talking to the Bell boy?”

“Talking to the River Spirit.”

“The devil, more like, and in a chemise. You stay away from that Bell boy. His father steals our wood for his furnace and his son will just as like steal your treasure, if you catch my meaning.

“May God hear that. Your apron, Ida. I needn’t tell you again.”

In her room, through the small window of which she could smell the river when the wind was right, Ida fastened her apron. In its pocket was the key to a carved box. Inside that, underneath her Bible, were a handful of gold coins, a gold ring and jeweled necklace her father’s mother had bequeathed her. She’d only tried them on when her own mother was fast asleep. She wasn’t allowed to wear them till she was married.

The key was fastened to a bracelet made of small iron links that James Bell had given her. She didn’t dare wear that, either.

“Satan can’t ever touch iron,” he had told her. “It’ll keep you safe.”

They had been much younger then, sitting under a canopy of leaves trying to scare each other with ghost stories while their fathers haggled over the cost of wood for the forge.

The River Spirit had evolved from those stories, being the volatile ghost of a woman who, Ida said, threw herself into the rushing waters in despair when her true love was slaughtered by pirates. When she was angry, she would kill and destroy without prejudice. When she was calm, she granted wishes to young lovers.

It was hours till Ida was able to slip away again. She had done her lessons and said her prayers and the summer sun was sinking. Her mother had gone to bed piously early and her father, as was his custom, had accompanied their men to the forges with the day’s haul of logs.

Halfway to the river, she stepped off the path to see how far went the little trail she’d spotted that morning. It was too defined to have been pressed down by deer, but not wide or obvious enough to have been cut by her father’s men.

In the stillness of almost-dusk came the soft echo of iron on wood. She took off her shoes and navigated carefully over pine needles and cooling dirt. She stepped into a man-made clearing just as a tree fell, the sound of twigs snapping and leaves being crushed masking her gasp. Two men with arms the size of small trees belted the trunk with leather straps and were hauling it away on a wider trail opposite the clearing.

Ida caught her breath and opened her mouth to demand an explanation, but before she had moved any farther into the clearing, James Bell was in front of her.

“Where did you come from?” she whispered.

“In my father’s forest?”

His jaw beneath his sweet rosy cheeks hardened. The sun flashed between the leaves, then dropped a finger’s length. James’s smile spread with the shadows. “Ida. Ida. When we marry, it’ll be our forest.”

She took two wide steps into the clearing and was close enough to see the gold flecks in his brown eyes. But she was gazing at the stumps beyond him, which seemed more pronounced in the twilight.

She could hear the grunts and straining of the men hoisting the tree onto a wagon, the thump of wood on wood, the creaking of wheels. She raised her hand and lowered her chin — it might have looked like a nod or a prayer.

“Ida, we can talk to your father right now.”

She had started to walk away, but his voice followed her. “I need to see to these men, Ida. Wait for me. Wait for me a moment.”

Yet she was already at the wider path and had turned toward home.

Her carved box was too big to fit in her apron pocket; she held it tightly against her chest as she strode back toward the river. She did not glance at the newfound path but passed it with her chin raised.

A branch had fallen over her path and in her rush she stepped on it, gouging the soft flesh of her sole. She spat the devil’s name and caught herself before she fell, stumbling forward and leaving rust-coloured footprints on the hard sand. At the river’s edge she jerked to a stop and loosened her grip on the box.

“River Spirit. River Spirit. How many hundreds of times have I pleaded for true love? Well, he isn’t, Spirit. He isn’t true. He’s only after my treasure.” She held the box aloft and walked into the water. It stung her bloody foot and gooseflesh rose from her ankles to wrists.

“Sprite or devil, I commit my treasure to you. May he never lay eyes on it.”

She thought she heard her name and in one exploding heartbeat she pitched the box as far as she could from shore. It hit the surface with a thud and sank without further ceremony. She turned away before the first wave of ripples had reached her legs.

James was standing at the tree line, across the thin strip of sand that was almost pink as the sky now.

Partway up the beach, she paused. James was frozen as well, waiting for her.

Her fingers were curled around the key inside her pocket.

“You’re a thief,” she said so quietly he had to lean forward to hear. “You’ll never have what’s mine. Not my land. Not my treasure.”

One step closer and she sank into a crevasse that had opened in the sand. James extended a hand and she stumbled out of his reach. The crevasse had begun to boil, and they frowned at it with eerily similar expressions of confusion. Ida recovered first; she pulled the key from her apron pocket and raised it above her head.

“Never,” she breathed, and she threw the key with all her power toward the bubbling hole. The iron sparked against a rock and the crevasse burst into flame, swallowing the key.

Ida smiled and walked backward till she was in the river again. “You see the devil. I see the river. Begone, thief; my treasure is taken already.”

The legend of the devil’s cauldron is told many different ways in various texts and on plaques within The Forges. What we know is that there was a girl, or two girls, or a woman, and a treasure, and the devil. Ida Poulin was the daughter of a wealthy woodlot owner who is believed to have hidden treasure in a fury when Matthew Bell, manager of the ironworks, stole trees to make charcoal. Bell’s eldest son was named James.

The devil’s fountain is a small pool of water on the beach that perpetually bubbles thanks to methane near the surface. Bring a book of matches and see if you can get it to light up.

We’re giving The Forges two sneakers (out of a possible, completely arbitrary five). The museum and trails are lovely and staff as cheerful as at all Parks Canada sites. But there’s no dedicated play area for kids to run off steam and the trail from the museum, through the upper and lower forges and back to the parking lot is rather short. Your best bet is to pair a visit with a day or weekend trip to La Mauricie National Park.

The Forges is about 140 kilometres east of Montreal. It is open from June 23 to Sept. 3. You have one last chance to visit this year, on Sept. 29 for Journées de la culture.