12The earth is trying to take back Mount Moriah.

So, too, is a passionate group of volunteers who are slowly, plot by plot, clearing brush and tangles of vine from forgotten headstones and calling up names and histories of tens of thousands of people buried on the edge of Philadelphia. 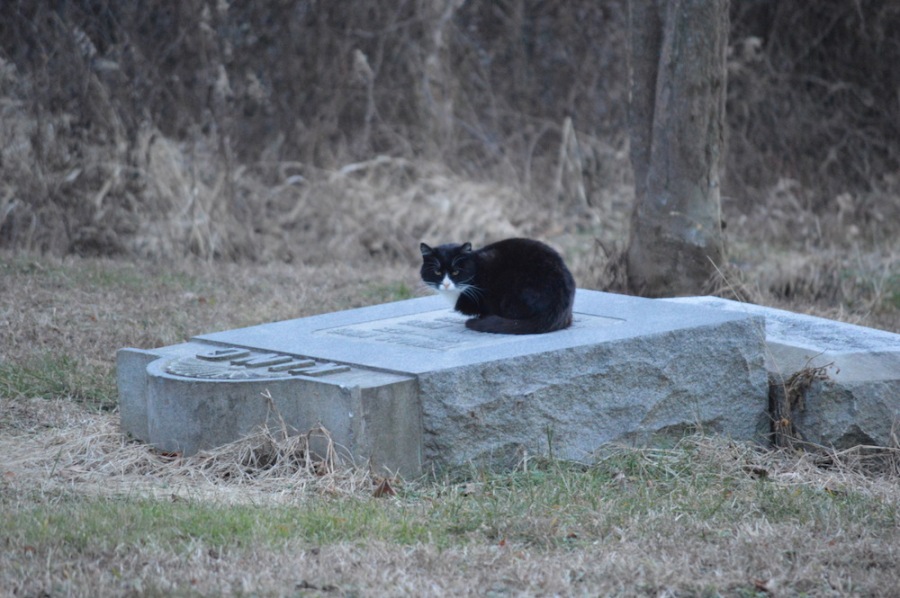 The Friends Of Mount Moriah Cemetery are caring for the forgotten, like Thomas King, who died in the late 1870s and is buried with his wife and daughter, both named Mary. He rests near the edge of the cemetery, with a view of the gatehouse ruins and, beyond that, the glass skyline of the city. In the last moments of dusk, his overturned stone retained just enough heat to attract a black and white cat who eyed me with a predictable mixture of disdain and curiosity.

There are other names here, overturned and upright, known and not: Eliza Jane, Annie Hughes, and Benjamin Loxley — the man whose house key found its way onto Benjamin Franklin’s kite.

The Friends stepped into the void left by the death of the last member of the cemetery’s board and a complete shutdown in 2011 amid suspicion of sketchy business and burial practices. The grass-roots community organization began mowing and hacking and clearing plots. In 2016, Philly magazine listed some of the obstacles they would have to overcome: “Trash dumping, drugs, prostitution, even wild dogs. There was nobody patrolling or taking care of the grounds. Criminals once ditched and torched a getaway car inside the gates after a shooting.”

They have 142 acres to contend with — and they are fighting with and alongside the earth.

The volunteers have ties to the community and to the people buried at Mount Moriah. They have fostered a Facebook group with nearly 6,000 members and fans of “one of the nation’s oldest rural parkland cemeteries.” They organize events. Boy Scouts have set up bird feeders. The natural wetlands attract butterflies which in turn attract joggers and strollers.

There is work yet to do. Many tombstones are lying on their backs, are cracked, or obscured by vines. The paths are pitted and uneven and mausoleums are missing vital stonework. It is a beautiful ruin, but will be more beautiful still when it is restored to the serene space it was when it was transformed in 1855 from farmland to graveyard.

The earth wants to take back Mount Moriah. The Friends will help it find a middle ground.